This article is about a limited event! To find out about the other events, click here!

Wordy Weekend was introduced in the

edition (Week 45). It is 48 hours long and is held on Saturdays and Sundays.

At this weekend event players must find the letters of a character's name in the game. The letters are gold/yellow to not be confused with Word Hunts. They appear in the same places as Weekly Hunt tokens.

Completing a name gives them a Super Mystery Box, after which they can move onto the next character. If they don't have a character they're given the opportunity to buy them using coins at regular price, or they can skip the character by watching an advertisement. However, they can only watch the advertisement if you have a secure internet connection, or else they will have to use keys to skip to the next character. To check that their Internet connection is working, they can go to the "Earn Coins" menu and see if the sponsored video comes up. If it does, they must check the Wordy Weekend tab again and it should show a video icon under "Skip" instead of Keys. If it doesn't show this, they must try watching the sponsored video and then going back to the tab. The Wordy Weekend event is the first time they can buy limited characters with coins after the edition where the characters originally appeared (see pictures on the end of this article).

The character order for Name Hunting seems to be based on a eight week cycle of the core 16 characters appearing in a predetermined order, 18 characters in Christmas Core (Elf Tricky and Buddy included), and 17 characters in Halloween Core (Zombie Jake included)

These are the Core lists:

The empty spots were filled in using a fixed rotation of 21 limited characters. Since there were only 20 empty spots one character wasn't used each weekend. In this rotation Zombie Jake, Elf Tricky, Jamie and characters released after Arabia edition didn't appear.

Sometimes, thematic Wordy Weekends may be hosted. They are always the same Musical core list, the same Movie core list and the same Dance core list.

This is the order of limited character rotation:

Beginning with Rio Week 57 the order has been successfully predicted using these patterns. To predict the order for a given week, start by using the formula MOD(week - 45, 4) + 1 to determine which Core list to use. Next use the formula MOD(week - 45, 11) + 1 to determine the Starting Point on the list of limited characters, and fill in the blanks starting with the first empty spot on the Core list. For example, Sydney Week 60 is predicted to use Core list 4, and start filling the blanks at point #5 Noon. However, this only worked until Tokyo Week 77. 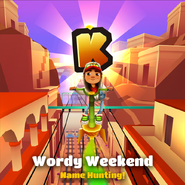 Name Hunting with Jake
Add a photo to this gallery
Retrieved from "https://subwaysurf.fandom.com/wiki/Wordy_Weekend?oldid=170881"
Community content is available under CC-BY-SA unless otherwise noted.