15. His second outfit, the Game Outfit, can be bought for

When New York was re-released, he received the Folk Outfit, costing

15. When wearing the outfit, his jacket changes to navy blue, his t-shirt turns red, his boots become black. His socks are colored yellow, and his sunglasses and gold chain have been replaced by a ochre panama hat with a black band.

During the second re-release, he has a new outfit; the Game Outfit which can be purchased with

30. In the outfit, he wears what a baseball fan would typically wear, which includes a blue cap, a yellow shirt, gray sweatpants, and a blue and white jumper.

Purchasing Tony during the event

Getting a Top Run with Tony

Getting a Top Run with Tony in his Folk Outfit

Getting a Top Run with Tony in his Game Outfit 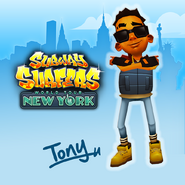 Tony surfing on the Liberty board 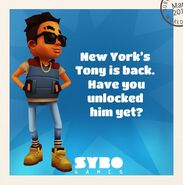 Getting a new High Score with Tony in his Folk Outfit 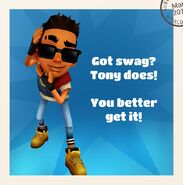 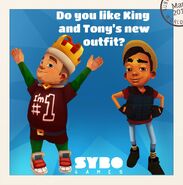 Jake, Tricky, and Tony
Add a photo to this gallery