Teddy is the twelfth limited hoverboard in Subway Surfers. Like the rest of the boards, it protects you from crashing for 30 seconds. When crashed, the board will explode and recharge for a few seconds before it can be used again. It has no special ability. Its only appearance was in Subway Surfers World Tour: Moscow. It can be bought for

The hoverboard has the appearance of a brown teddy bear whose eyes seem to be closed. It also has black claws and seems to be smiling. 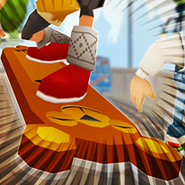 Add a photo to this gallery
Retrieved from "https://subwaysurf.fandom.com/wiki/Teddy?oldid=116653"
Community content is available under CC-BY-SA unless otherwise noted.