12,000. It is the second cheapest buyable character in Subway Surfers, topped only by Lucy. Its first outfit, the Space Outfit, can be bought for

15. Its second outfit, the Toy Outfit, can be bought for

Tagbot is a robot that wears a hat that is the same as Jake's. Its hat has the words "Sub Surf" on it. Tagbot is one of the few fastest characters in the game. During the Miami world tour, it received a redesign, giving it eyebrows. This was reverted back later.

In Tagbot's Space Outfit, it has blue stripes and a satellite, slightly resembling R2D2 from Star Wars. It also has a few minor redesigns. It costs 15

In Tagbot's Toy Outfit, it is painted red and with buttons on his chest, and a twisting key, that players twist in order to make the toy move around. It costs 30

Getting a new Highscore with Tagbot 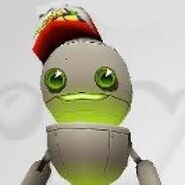 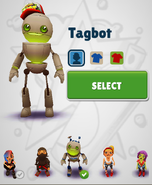 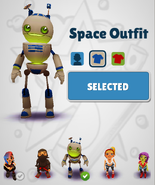 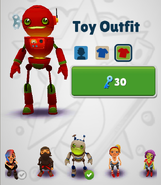 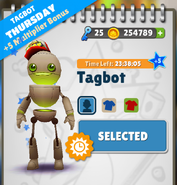 Selecting Tagbot during the event 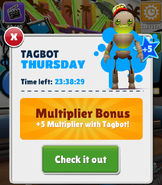 Hunting with Tagbot during the Wordy Weekend event

Unlocking Kick-Off with Tagbot in its Space Outfit 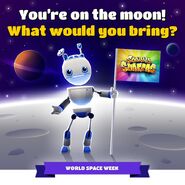 Add a photo to this gallery
Retrieved from "https://subwaysurf.fandom.com/wiki/Tagbot?oldid=102582"
Community content is available under CC-BY-SA unless otherwise noted.