Super Runner Fresh is a limited character from the

update. In order to unlock him, the player needs to complete the 5th stage of the Super Runner City.

Fresh’s Super Runner outfit features lime-green glasses, black headphones with chartreuse-green X-marks on each pallet ornament, a moss-green vest that is also a boombox with a speaker on the chest, three multicolored square buttons on the lower-right side of the front, and a cassette player on the lower-back with a loose belt dangling, a bright-red tank top, lime-green pants, and moss-green boots. Fresh’s hair is dyed dark-green, and his nails are painted chartreuse-green. When on display, Fresh’s speaker produces visible sound waves. 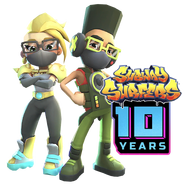 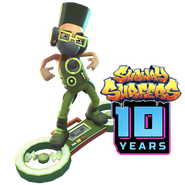