Sydney came out with a new character, Kim, costing

(keys)! Keys are used to revive the character, continuing the game when fail, and also to buy different outfits for certain characters. But as usual, Keys are rare. They can be picked up while running or obtained by the Mystery Box. 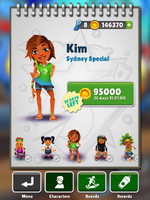