Subway Surfers World Tour: Rome 2014 is the seventeenth installment of the Subway Surfers World Tour series and the twenty-second update of the game. It's the third edition to be re-released. This edition saw the re-release of the character, Roberto and the hoverboard, Kick-Off. It also gave an outfit to Roberto, the Fan Outfit, and gave Zoe her first outfit, the Curly Outfit. This edition also introduced Spraycan Awards, which replaces trophies, however, players have to re-collect trophies to get some of the awards. Also on this edition players having to collect eggs as (

) their Weekly Hunt tokens, as it was an Easter special. It was released on Thursday, 17 April 2014. 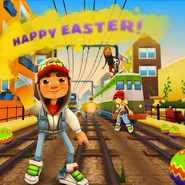 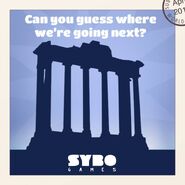 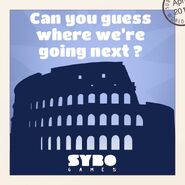 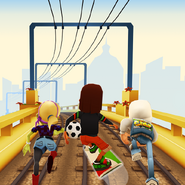 Zoe, Jake and Roberto are being chased by The Inspector

All the prizes of the Weekly Hunt
Community content is available under CC-BY-SA unless otherwise noted.
Advertisement