50,000), and also introduce a new hoverboard called Rocket to celebrate the New Year that have a pack that coast Real Money similar With what happened with the Scarab Board in the Cairo 2018 Update and the Colour Cloud Board in the Mumbai 2018 update. The edition was originally intended to be released on December 27, 2018, but it was released on December 28, 2018. It’s weekly hunt tokens are Parrots. 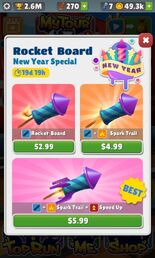 Add a photo to this gallery
Retrieved from "https://subwaysurf.fandom.com/wiki/Subway_Surfers_World_Tour:_Rio_2019?oldid=91199"
Community content is available under CC-BY-SA unless otherwise noted.