Subway Surfers World Tour: Paris 2018 is the seventy-eighth installment in the Subway Surfers: World Tour series and the eighty-third update of the game. This edition re-released the limited character of Paris, Coco, along with her Art and Jester Outfits. This edition introduced a new board, Sweetheart, and re-released the limited hoverboard, Rose. The Weekly hunt tokens are the Hearts. It was released on Thursday, February 8th, 2018. 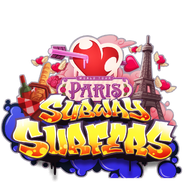