Subway Surfers World Tour: New Orleans 2018 is the eighty-ninth installment in the World Tour series and the ninety-fourth update of the Subway Surfers. This edition marks the debut of a vampire named Scarlett, and for the third time Eddy is introduced as a limited character (

95,000). He is re-released with a new outfit called the Vampire Outfit for

30. The Pumpkin board also made a comeback (

50,000). All the Halloween-special characters and hoverboards are also available. The Weekly Hunt tokens for this editions are bats (

), different from pumpkins from the

A new outfit for Eddy called The Vampire Outfit 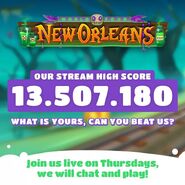 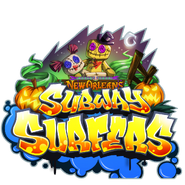 The Welcome Greeting
Português do Brasil
Community content is available under CC-BY-SA unless otherwise noted.
Advertisement