Subway Surfers World Tour: Miami 2019 is the hundred-fifth update of Subway Surfers and the hundredth installment in the World Tour series. This edition brings back Nick and Flamingo, This edition have a new board called 4th of July in celebration of Independence Day in USA that has a Bundle which costs real money. Its weekly hunt tokens are Flamingo. It was released on June 27, 2019.

A new hoverboard, 4th of July

Nick with Jake and Tricky 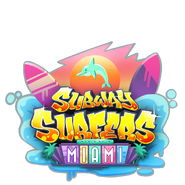 The Graffiti
Español
Community content is available under CC-BY-SA unless otherwise noted.
Advertisement