95,000), with a brand new outfit called the Neon Outfit (costing

30), and the return of the Flamingo board (costing

Gameplay with Harumi of Tokyo

by watching the Daily Video 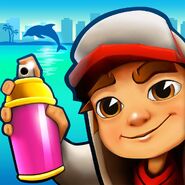 The re-released Flamingo board

Add a photo to this gallery
Retrieved from "https://subwaysurf.fandom.com/wiki/Subway_Surfers_World_Tour:_Miami_2017?oldid=122212"
Community content is available under CC-BY-SA unless otherwise noted.