It was available for free, for a limited time. It includes a new character, Nick, and a hoverboard, Flamingo. It also includes the newest board, Hot Rod available for

This update was released on 30 May 2013. This version also introduces new outfits for some characters. A free outfit was given to Jake, which was the Dark Outfit. Beside that, the Star Outfit also became available. Tricky received two new outfits as well, one being Camo Outfit and the other being Heart Outfit. 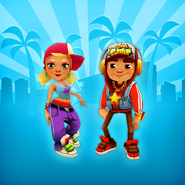 New outfits for Tricky and Jake

A second new hoverboard: Flamingo
Add a photo to this gallery
Retrieved from "https://subwaysurf.fandom.com/wiki/Subway_Surfers_World_Tour:_Miami?oldid=150048"
Community content is available under CC-BY-SA unless otherwise noted.