Subway Surfers World Tour: London is the eleventh installment of the Subway Surfers World Tour Series, and the second one to be taken place during Christmas, and the sixteenth update of the game. This edition introduced a new limited character, Jamie an Englishman, and two new Hoverboard, Snowflake and Jingles. The gameplay has the Christmas theme, with The Inspector dressed up as Claus and his dog as a reindeer, notably Rudolph. This edition also gave Frizzy (Ella) two new outfits, the Rasta Outfit and the Gold Outfit which cost 15

for the Weekly Hunt. It was released on Thursday, 21 November 2013.

Elf Tricky from the Christmas edition which reappeared at this edition 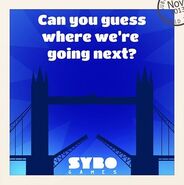 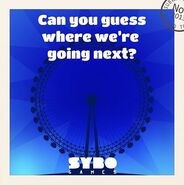 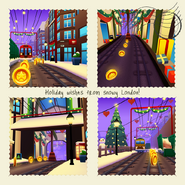 Are you getting into the Holiday spirit?