Subway Surfers World Tour: Hawaii 2017 is the sixty-fifth edition in the World Tour series and the seventieth version in Subway Surfers. This edition brings back Izzy (costing

30) with a brand new board called the Ukulele (costing 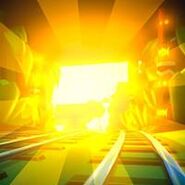