Subway Surfers World Tour: Cairo 2018 is the seventy-sixth installment in the World Tour series and the eighty-first update of the game. This edition marks the re-release of the limited character Jasmine, who is an Egyptian princess (

30) and re-released the Safari Outfit (

15). The Croc board also made a reappearance (

50,000) and a new board was introduced, the Scarab board which can be bought for real money. It has two special powers, called the Smooth Drift ( 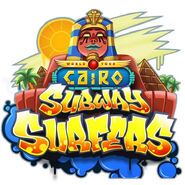