Spike looks like a "teenage punk rocker" with a white tank top, a black jacket with spikes at the shoulders and an red A on the back, light-blue jeans, black shoes with red shoelaces, and has a red and gray Mohawk. He also has blue eyes.

During the Paris 2013 update, he received 2 new outfits, which are the Rock Outfit and the Punk Outfit. They cost

In his Rock outfit, a little more changes are visible. He loses his mohawk and wears black make up around his eyes. His T-shirt changes to a darker shade and he wears ripped dark blue jeans. He also has a spiked bracelet on his right arm.

In his Punk outfit, there are some changes. he has spiky green hair, a red shirt and a blue tie with dark blue stripes. He also has face piercings, including one on his nose.

Getting the last Guitar before unlocking Spike

Getting a Top Run with Spike

Getting a Top Run with Spike in his Rock Outfit

Getting a Top Run with Spike in his Punk Outfit

Getting a highscore with Spike in his Rock Outfit

Getting a Highscore with Spike in his Punk Outfit

The Inspector with Spike, Jake, Yutani, and Tricky. Fresh is also seen in this photo holding the Inspector's dog. 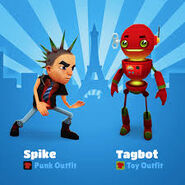 Spike with Fresh, Yutani, and Dino

Spike got a high score.

Spike in his Punk Outfit

Spike and Lucy
Add a photo to this gallery
Retrieved from "https://subwaysurf.fandom.com/wiki/Spike?oldid=157305"
Community content is available under CC-BY-SA unless otherwise noted.