Sofia is a character exclusive and limited to

Sofia is a Argentinan girl who wears a green cap facing backwards, gray headphones around her neck, rainbow leggings, a pair of red sneakers, and a black tank top. She has brown eyes and brown hair.

In her Gaucho outfit, she has a down hat, two pigtails, a white shirt, a red Cape and brown trousers. She also has brown boots. She seems to be a cowgirl.

In her Tango outfit, she has a typical tango dance costume, a red frilly dress and a cyan green waist, the dress has a red flower on her bust, she wears red shoes with cyan green details including small cyan green flowers, a transparent dark tights, her hairstyle is a hairclip with a red and cyan green flower. 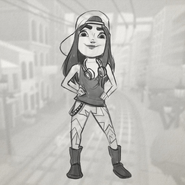 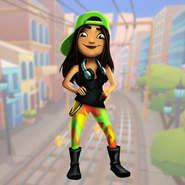 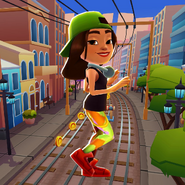 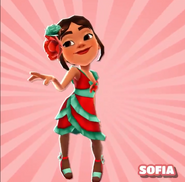 Sofia welcoming us to

Sofia with Roto Board

Sofia with Jake and Tricky

Sofia along with other female surfers 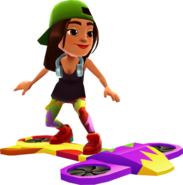 Sofia surfing on the Splash 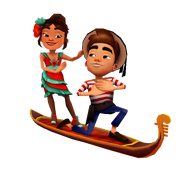 Sofia in her Tango Outfit surfing on Flamingo

Sofia with her hand out

Sofia dancing
Add a photo to this gallery

Subway Surfers World Tour 2020 - Sofia
Add a photo to this gallery
Retrieved from "https://subwaysurf.fandom.com/wiki/Sofia?oldid=168840"
Community content is available under CC-BY-SA unless otherwise noted.