Start a Wiki
Snowflake is the fourteenth limited hoverboard in Subway Surfers. Like any other hoverboard, it protects you from crashing for 30 seconds. When crashed, it will explode and need a few seconds to recharge. It was released during the Subway Surfers World Tour: London and re-released during London 2014.

It has a picture of a snowflake on a red, blue and white striped background. 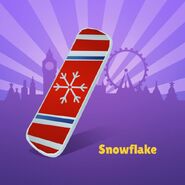 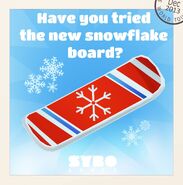 Add a photo to this gallery
Retrieved from "https://subwaysurf.fandom.com/wiki/Snowflake?oldid=105788"
Community content is available under CC-BY-SA unless otherwise noted.