Score Booster is a power-up that was introduced in Subway Surfers World Tour: Rio. It costs

3,000 and is available through the Mystery Box or the Super Mystery Box as a rare item. It is also possible to get it from Weekly Hunts. It increases the player's multiplier by 5, 6 or 7 until the end of the run (it depends on how many the player uses).

Multiplier when using the Score Booster

The Score Booster as seen at the Store 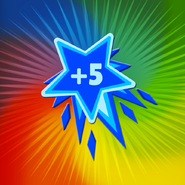 Score Booster Promo
Add a photo to this gallery
Retrieved from "https://subwaysurf.fandom.com/wiki/Score_Booster?oldid=125330"
Community content is available under CC-BY-SA unless otherwise noted.