Scarlett is a Halloween special character in Subway Surfers. She was released in

Scarlett is a vampire that has plum red hair she wears up in a bun on the back of her head. Her face is a ghostly pale violet with green lips and clearly evident fangs; her eyebrows match her plum red hair.

She wears a formal winter outfit consisting of a long sleeve purple corset jacket over a layered green skirt, and with a dark red over-skirt. The outfit is finished with a dark red bow at her neck held by a motif brooch. She wears skull earrings that match the brooch, as well as elbow-length red gloves; black tights; and purple shoes. She carries a green umbrella which matches the colour and style of her skirt. A bat hangs from the edge of her umbrella.

In her Catrina outfit, Scarlett wears an ornate long sleeve floral dress in navy blue with red flowers and luminous green foliage. The hem, the sleeve ends, the waist and the neckline are all adorned with frills in red and/or luminous green. Her décolletage is decorated with a spider-inspired design. She wears black halloween tights, and luminous green shoes adorned with a red flower to tone with her dress. Her hair is worn in a more relaxed down style, her face is made up to match the outfit, and she wears red flowers at the front of her neck, and behind her left ear. On her head she wears an extraordinary hat in navy blue with luminous green edging; which seems to double as an umbrella The centrepiece of the hat incorporates a skull along with red flowers and yellow candles

Scarlett with Jake and Tricky

Scarlett with Zombie Jake and Manny 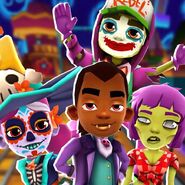 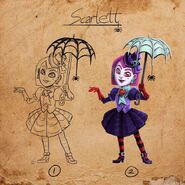 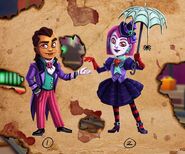 Scarlett Welcome us in 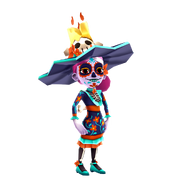 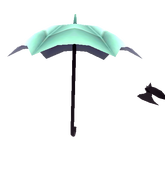 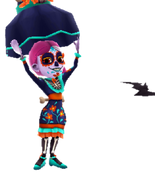 Scarlett in her Catrina Outfit surfing on Hexed

Scarlett in her Catrina Outfit surfing on Thunderbolt

Scarlett on her Catrina outfit on the Welcome Pose 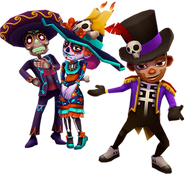 Scarlett in her Catrina Outfit with Eddy and Manny

Unlocking Torito with Scarlett in her Catrina Outfit