Scarab is a hoverboard released with

. Like any other hoverboard, it protects you from crashing for 30 seconds. When crashed, the hoverboard will explode and need to recharge for a few seconds before using again. It is a scarab which represents Egypt. Like most of others limited hoverboards, it costs

This board is inspired from the Scarab, which is one of the Ancient Egyptian symbols, it takes the shape of the scarab beetle, the board’s arms are golden, with a red head and green bottom along with golden stripes, during speed up power up, it makes green-yellowish gases, while during smooth drift power-up it’s wings appear to be green with golden stripes as in the center of the board.

Unlocking Scarab with Jake in the Star outfit 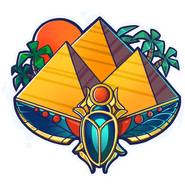 Scarab on the Cairo city icon

Scarab golden version after the 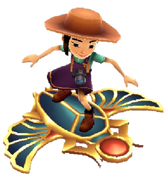 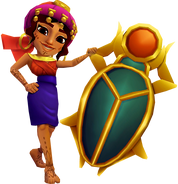 Salma and Scarab Board 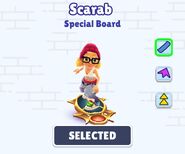