Rudy is the twenty-fourth limited hoverboard in Subway Surfers. Like any other hoverboard, it protects you from crashing for 30 seconds. It can only be unlocked by collecting

Weekly Hunt. Like any other hoverboard, it protects your character from any obstacles for 30 seconds. When crashed, it will explode and need a few seconds to recharge before it can be used again. It was first released and had its only appearance in the

, Rudy made its comeback in the Weekly Hunt by collecting 40 penguins in the first and second week of the hunt.

It takes the shape of the popular reindeer, Rudolph.

All the prizes of the Weekly Hunt 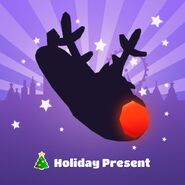 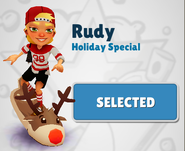 Dino unlocking the board Rudy in 2015

Rudy comeback in the Wild Wednesday

Dino riding in the sale the board Rudy 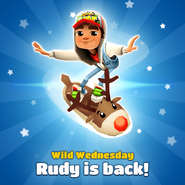 Freya in her Winter Magic Outfit on Rudy

Fresh in his Sport Outfit surfing on Rudy