Rin is a special character, released in the 7th Birthday Edition of Subway Surfers

Her first Outfit, the Lunar Outfit released on

can be purchased for

, she can be purchased for

She has dyed hair in white-pink color combed in braid and hazel eyes. As for the clothing, she wears a black hat with a zipper design, a black tank top with a purple print of the eye, revealing her belly button, and black tracksuits with pink and cyan stripes and sneakers.

In her Lunar Outfit, she has brown hair, with her hair tied up with bows. She wears a red shirt with pink floral motifs with gold stripes and she wears blue shoes with flower decorations on it. She also holds a propeller but she does not carry it during gameplay.

Getting a Top Run with Rin 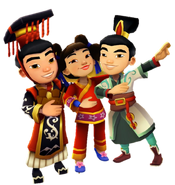 Rin in her Lunar Outfit with Qin and Hou

Rin with a jetpack glitch 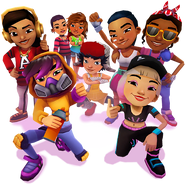 Rin along with other female surfers

Getting a high score with Rin 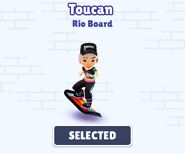 Rin surfing on Queen of Hearts