Rex is a limited character that is exclusive to

. He is also the twenty-third limited character in Subway Surfers, and the twenty-first in the World tour series. He can be purchased with

95,000, just like all other limited characters. His first outfit, the Show Outfit, costs

Rex has black hair in a large pompadour, blue eyes, and a red and white jumpsuit. He is shown to be a performer, akin to Elvis Presley. He has a shapely jaw (more obvious in the start screen where he can turn his head), much like his inspiration.

In his first outfit, the Show Outfit, his clothes are red, white and blue instead, and a star is placed on his belt. He also seems to have a short red cape on his back. 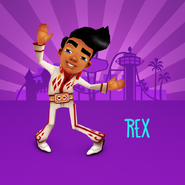 Rex surfing on the Roller Board

Rex and his new friends, Jake, Tricky, and Fresh, playing in the 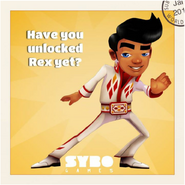 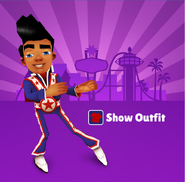 Getting a Top Run with Rex

Getting a Top Run with Rex in his Show Outfit 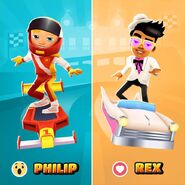 Rex riding the Chrome board

His Old version of his Win Outfit

Rex along with other surfers
Español Français Português do Brasil Türkçe
Community content is available under CC-BY-SA unless otherwise noted.
Advertisement