Unlock Codes are a feature that was added in the

update. It allows you to redeem various promotional offers by going into settings, scrolling down to the "Promo Codes" option, and then entering a code provided by Kiloo & SYBO Games.

update, the feature was removed for iOS users, with Kiloo stating that they were not able to continue the feature due to App Store guidelines. However, the feature returned with the

, its name was Promo Code. However, in the

update, this feature was disappeared on iOS users again without any reason, But The promo codes came back for iOS with this link https://subwaysurfers.com/redeem

The following table is a list of all the promo codes released by Kiloo & SYBO Games: 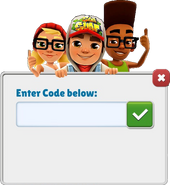