980,000. Prince K is the most expensive character of all characters in Subway Surfers. His first outfit, the Jag Outfit, costs

Prince K is a boy with a brown robe, light chocolate skin, golden shoes, watch and sunglasses. It seems that he's of Arabian or northern African descent, due to his brown skin color and his unique outfit.

During the Vancouver edition, he received the Jag Outfit. He wears a robe which is the skin of a white leopard, 2 golden headbands, and his sunglasses have turned into 'golden glasses'.

During the second release of Paris, he received the most expensive outfit, the Shine Outfit, which is the gold'est' out of all the other outfits. His clothes change to white and shiny, and he gets a necklace.

Prince K on the Superhero board 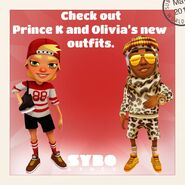 Getting a Top Run with Prince K

Getting a Top Run with Prince K in his Jag Outfit

Getting a Top Run with Prince K in his Shine Outfit 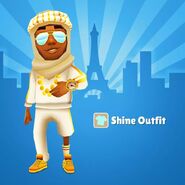 Trying out Teleporter with Prince K in his Jag Outfit

Add a photo to this gallery
Retrieved from "https://subwaysurf.fandom.com/wiki/Prince_K?oldid=102586"
Community content is available under CC-BY-SA unless otherwise noted.