Ninja is a character that can be unlocked by purchasing with

Ninja looks like a regular ninja except his ninja outfit is brownish instead of black, with a red belt, and he wears red wooden sandals. Ninja is most likely based on traditional Japanese Ninja warriors.

In his Yang Outfit, which costs

In his Flame Outfit, which costs

25, he now wears an outfit that resembles a basketball player. The outfit has the appearance of a short-sleeved black shirt. Around his waist is a white belt. He now wears blue shorts with flames coming from the bottom. He also now wears red and white shoes.

Ninja on the Bouncer board 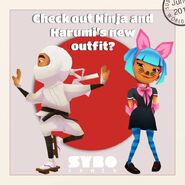 Ninja & Harumi receiving their new outfits in the 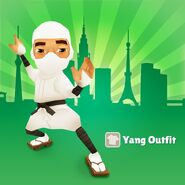 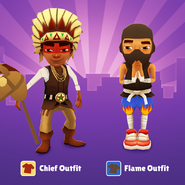 Both Ninja and Wayne receiving their own outfits 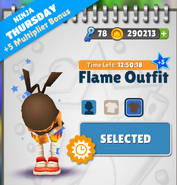 Ninja in his Flame Outfit surfing on Hammer

Getting a highscore with Ninja

Getting a highscore with Ninja in his Yang Outfit

Getting a highscore with Ninja in his Flame Outfit