Nina is a limited character from

40, unlike the other limited characters who are unlocked through coins. Her first outfit, the Cyberpunk Outfit, costs

15 and her second outfit, the White Night Outfit, costs

Nina is a German girl who has short-shaved purple hair, silver earrings, dark pink lipstick, a black spiked choker and a silver necklace. She wears a red blouse with black stripes, short ruffled purple shorts and blue tights. She also wears red sneakers. She is holding a microphone.

In her Cyberpunk Outfit, she has a long, green wig with purple decorated welding glasses on the top of her head, as well as green eyeshadow and purple lipstick. She wears a purple dress with a wide black corset, green-and-black striped tights and large black boots with purple laces. She also wears purple-and-green fingerless gloves of some sort. She still wears her choker and necklace, but her choker is purple.

In her White Night outfit, she has short-shaved cyan hair, cyan goggles and cyan lipstick. She wears an oversized shirt with a black belt in the middle. Underneath the oversized shirt is a red striped long-sleeve shirt. She also has red and gray stripped pants with a rip on the left pant leg and black boots.

Nina with other female surfers 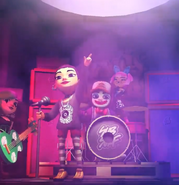 Nina in her Cyberpunk Outfit on Rockstar 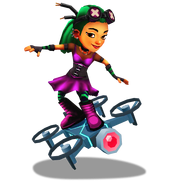 Nina in her Cyberpunk Outfit on Roto 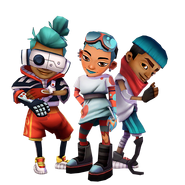 Nina in the White Night Outfit surfing on Buddy Bear

Nina On The Welcome Pose
Add a photo to this gallery

Subway Surfers World Tour 2018 - Nina
Add a photo to this gallery
Retrieved from "https://subwaysurf.fandom.com/wiki/Nina?oldid=169729"
Community content is available under CC-BY-SA unless otherwise noted.