Multipliers are essential in getting high scores in Subway Surfers. They can be increased permanently by completing a set of 3 Missions. The higher your multiplier, the easier it is to get highscores. For example, it is easier to get a certain score with a 10x multiplier than a 5x multiplier. Although the multiplier's max is 30x, add more it can still be increased with the Score Booster, the Super Mysterizer, the 2X Multiplier and the Special Thursdays event. With them, you can get your multiplier all the way to 100x! However, this effect is only temporarily.

Introduction to new missions over x30

The multiplier when using the Super Mysterizer

x30 is the maximum level without the use of power-ups

x40 obtained during Tricky Thursday and using a Score Booster

x40 Obtained by a 10+ Multiplier from a Super Mysteriser 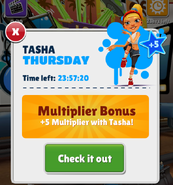 Add a photo to this gallery
Retrieved from "https://subwaysurf.fandom.com/wiki/Multiplier?oldid=105000"
Community content is available under CC-BY-SA unless otherwise noted.