Monkbot is a Chinese special character released in

Monkbot is a robot made in China that wears some traditional Chinese clothing like a big bamboo hat and a red pearl necklace. He wears a white and gold robe with a orange tie around its waist. It seems like it has bandages on its right arm and left leg. He also has a round gold and silver head, has 3 fingers on each hand, and has one green eye. 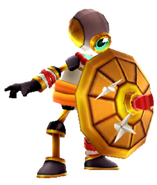 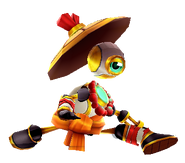 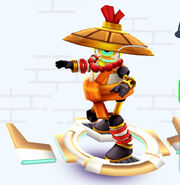