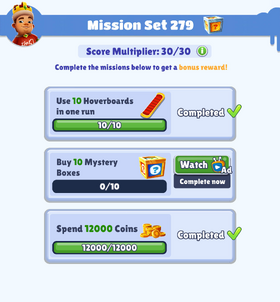 Missions are challenges that require the player to complete to increase their multiplier or to get a Super Mystery Box (only when multiplier has reached x30). You can find it at the top-left part of your screen when not playing. Pausing your game can also lead you to it. Each mission set has 3 missions. When all 3 missions have been completed, your multiplier will be increased by 1. When your multiplier has reached its max, the reward will be replaced with a Super Mystery Box. The further you progress through the missions, the harder they become. As well they'll cost more time to accomplish. Also it's possible to skip a mission by paying with collected coins or watching an ad.

There are different types of missions in the game.