View source
Not to be confused with King.

Ming is a chinese special character released in

Ming is a surfer girl from China (most specifically Hangzhou in the Chinese version). She has pale skin, hazel eyes and long black hair.

Ming’s original outfit is a traditional Chinese silk cheongsam dress in a pale teal colour with pink flowers and blue trim around the neck and arms. She accessorises the dress with red elbow length gloves, lace-up ankle boots which Which are visible to her toes, match the dress and gloves, and a red parasol. In this outfit she wears her hair in a simple ponytail, and wears teal eyeshadow to match her dress, and red lipstick to match her gloves.

In her White Snake Outfit, she uses a empress outfit, with a long light blue dress with golden details and white snake designs, green earrings, her hair is longer and tied in a bun with a silver snake tiara and her umbrella that was red changes to light blue. 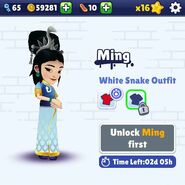 Ming in her White Snake Outfit in Shop

Ming On The Welcome Pose

Ming surfing on the Parasol Board

Ming in her White Snake Outfit surfing on Cobra