View source
Not to be confused with Nina.

Mina is a limited character that can be purchased with

95,000. She is a limited character exclusive to

. Her first outfit, the Robo Outfit, can be bought for

30. Her second outfit, the Pop Outfit, can be bought for

Mina is a South Korean girl with curly brown hair with bangs, brown eyes, blue earrings, turquoise and white converse shoes, blue sweatpants with two light blue stripes on each side, a yellow belly shirt and a turquoise sweatband on her right arm.

In this outfit, her hair and clothes change to black. She wears red face make-up across her eyes(more like an eye mask).

In this outfit, her outfit resembles the outfit that SNSD wears in their music video except that the color of the clothes are pink, as well as her receiving black leggings. In this outfit, she also resembles an air-hostess or a pilot.

Getting a Top Run with Mina

Getting a Top Run with Mina in her Robo Outfit

Getting a Top Run with Mina in her Pop Oufit 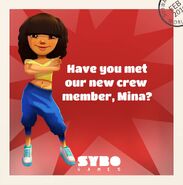 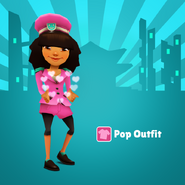 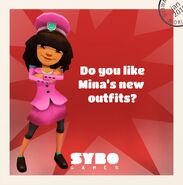 Gameplay on a rooftop

Mina on the Bubblegum board

Mina surfing on the Bubblegum board

Getting a highscore with Mina 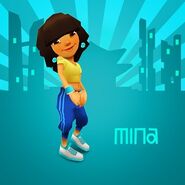 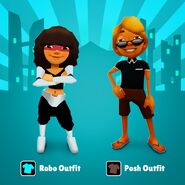 Mina welcomes the player to Seoul!

Mina Welcomes The Player To

Mina with Jake and Tricky

Mina along with other female surfers 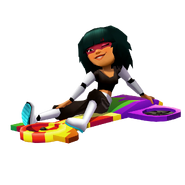 Mina in her Robo Outfit sitting on Splash

Mina surfing on the Diablo

Mina surfing on the Uprock

Mina surfing on the 9th Birthday 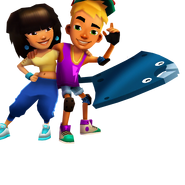 Mina and Nick with the Ray board

Mina along with other surfers