Mimi is a special character released with the

Mimi is a Chinese girl with black lair and brown eyes. She has lots of pink in her clothes, both in her coat and hat and also in her tennis shoes, she wears a white shirt with a red heart on it and a pair of jeans. She also has a pet ferret.

In her Folk Outfit, she wears a Chinese empress outfit, with pink, white and light blue colors, she has a Chinese hairstyle with a big bun with a star clip with a flower. 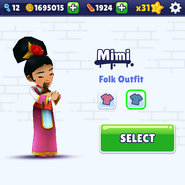 Mimi on Sakura Season event, for 40

Mimi in her Folk outfit surfing on Leaf

Mimi picking up her ferret 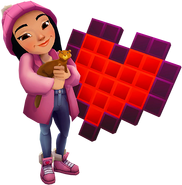 Mimi holding her pet and the Pixel Heart Board 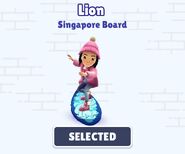 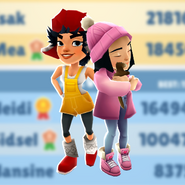 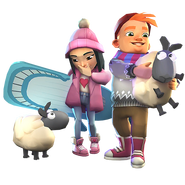