Start a Wiki
Maeko is a special character released with the Singapore 2019 update.

Maeko wears a yellow and teal hoodie seprated by a wave on the teal side, orange pants, a dark orange baseball cap facing backwards, gold shell earrings and yellow sneakers with white soles and orange fish on the tounges.

In the Hostess Outfit, Maeko wears a typical hostess outfit, wears a hat with her hair tied back, unlike her first outfit, she has a yellow suitcase. 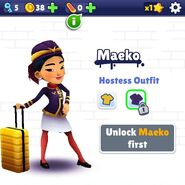