Start a Wiki
Lumberjack is a type of hoverboard that protects from crashing for 30 seconds. When crashed, it will explode and will recharge for a few seconds before using again. The Lumberjack is the cheapest hoverboard in the game. It seems to be made of wood, as there are wooden patterns on it.

During the Mumbai re-release, it received a new board upgrade, called Double Jump which costs

During the second Paris re-release, it received a new board upgrade, called Stay Low which costs 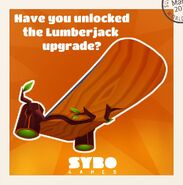 Unlocking Lumberjack with Tagbot
Add a photo to this gallery
Retrieved from "https://subwaysurf.fandom.com/wiki/Lumberjack?oldid=103495"
Community content is available under CC-BY-SA unless otherwise noted.