Liu is a special character released in

She is a black-haired Chinese girl with dark brown eyes who wears traditional Chinese clothing, such as a straw hat and a robe. She wears dark Purple shoes with pink pants that have a gold flower design. She wears a blue and gold robe with a pink tie around her waist. She wears a pink/yellow flower. Her straw hat has a pink attachment on her hat of some sort that keeps her hat on.

In the Birdwatcher Outfit, she still wears a big straw hat, her hairstyle changes a little, she wears a outfit with a dark green shirt and a purple jumpsuit and brown boots, she also has a camera so the outfit name is "bird watcher outfit ". 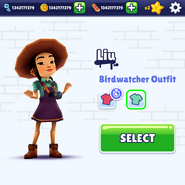 Getting a Top Run with Birdwatcher Outfit

Liu Birdwatcher Outfit with Pedal board.

Liu Birdwatcher Outfit with Kitty Board.
Add a photo to this gallery
Retrieved from "https://subwaysurf.fandom.com/wiki/Liu?oldid=128890"
Community content is available under CC-BY-SA unless otherwise noted.