Lee is a limited character that is exclusive to

95,000, just like all other limited characters. His first outfit, the Silk Outfit, costs

Lee is a Chinese boy with black hair and brown eyes. He wears a white tank top, a green jacket, ripped black pants, light blue sneakers, and a blue baseball cap. His jacket also has badges.

He wears a Chinese robe and pants. His sneakers are replaced by slippers, his juggling ball came red, his cap replaced by a red Chinese top. His hair came longer with a braid.

The Inspector's Dog and Lee

Lee & the The Inspector's Dog

Lee in his Silk Outfit holding a red ball

Lee surfing on Naga board 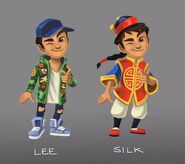 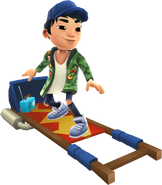 Getting a Top Run with Lee in his Silk Outfit

Lee in his Silk Outfit surfing on Roller