Lauren is a limited character that is exclusive to

In her Tally Outfit, her hair turns into some dreadlocks, and is worn under an American red-white-blue patriotic hat with white stars. She also wears a dress with a predominantly white top (which has red and blue accents on the bottom) and a red-and-white striped skirt. Her socks and sneakers are replaced with red flats. She also wears purple lipstick.

In her Pilot Outfit, she adds a pilot hat with pilot goggles, a red blouse, a brown zip-up, yellow gloves, pale brown trousers and high black boots. She does never wear any lipstick in this outfit and her hair is covered up. 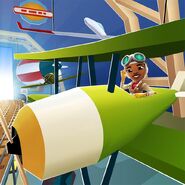 Lauren in an airplane

Happy Thanksgiving Day: Lauren with Jake and The Inspector's Dog

Lauren along with other female surfers 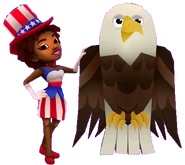 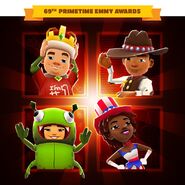 Lauren in her Tally Outfit with King in his Royal Outfit, Wayne and Yutani
Español Français Português do Brasil Türkçe
Community content is available under CC-BY-SA unless otherwise noted.
Advertisement