View source
Not to be confused with the hoverboard, Coral.

Koral is a limited surfer from

She has grayish-blue skin. Her hair is light blue in color and shaped like ocean waves. Her eyes are yellow and under them she has light blue markings. On the extremities of her limbs it has purple scales. She can transform her legs for a mermaid tail, which is gray in color. Being its purple ears, behind these it has fins of the same color. Wear an orange sleeveless sweater with a pink fish print. When she swaps her mermaid tail for her legs, she wears beige shorts with blue wave prints. She wears a green fish brooch(more like a leaf) on the corner of her forehead. 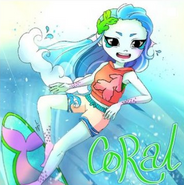 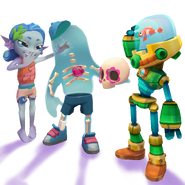 Koral with Tankbot and Bob the Blob 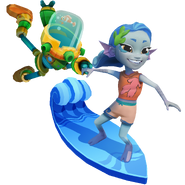 Tankbot and Koral in the Beach board
Español Français Português do Brasil Türkçe
Community content is available under CC-BY-SA unless otherwise noted.
Advertisement