Kick-Off is the third limited hoverboard in Subway Surfers, which was introduced in

. Like any other hoverboard, it protects you from crashing for 30 seconds. When crashed, the hoverboard will explode and needs to recharge for a few seconds before being used again.

The board has a picture of a soccer ball and the colors of the Italian flag (or il Tricolore) behind the soccer ball. 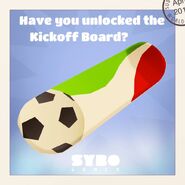 Have you unlocked Kick-Off yet?

Roberto surfing on the Kick-Off hoverboard

Unlocking Kick-Off with Tagbot in his Space Outfit 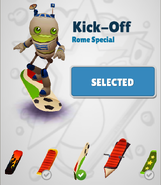 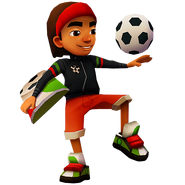 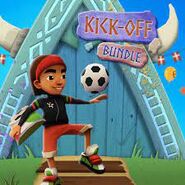 Roberto in his Fan Outfit holding Kick-Off and playing with a football in the kick off bundle
Español Français Português do Brasil Türkçe
Community content is available under CC-BY-SA unless otherwise noted.
Advertisement