Kareem is a limited Subway Surfers character from

. He can be purchased for

Kareem is a teenage Arabian Emirati boy with brown hair and orange eyes. He wears a white shirt under a teal hoodie with blue designs, black pants, white shoes with cyan laces and orange fingerless gloves.

His first outfit is the Silk outfit. He wears a pink silk shirt with blue jeans. He also wears black shoes. His gloves and hoodie are removed.

Kareem in the Turbo Team Promotion Poster with Ace

Kareem with Desert Racer Board

Welcome To Dubai with Kareem 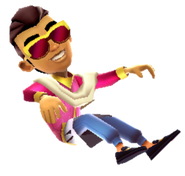 Kareem in his Silk Outfit surfing on Desert Racer

Kareem in his Silk Outfit riding Magic Carpet with Salma 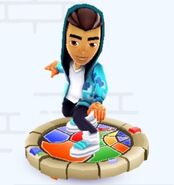 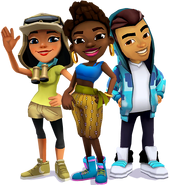 Kareem, Jasmine in her Safari Outfit and Zuri in her City Outfit