Jingles is the fifteenth limited Hoverboard in Subway Surfers. Like any other hoverboard, it protects you from crashing for 30 seconds. It can only be unlocked by collecting

weekly hunt, and during it's reappearance during the

editions. It was actually a secret holiday gift for anyone who manages to collect all 60 trees in 2 weeks. Like any other hoverboard, it protects your character from any obstacles for 30 seconds. When crashed, it will explode and need a few seconds to recharge before it can be used again. It's first appearance was in

It has the appearance and shape of a sleigh with a bell tied up with two leaves. 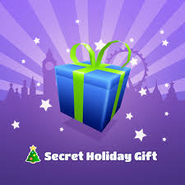 The secret holiday gift containing the Jingles board 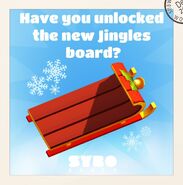 Purchasing Jingles during the reappearance.

Preparing the unlock board Jingles

Buddy riding the Jingles board