Jia is a limited edition character from

95,000, like any other limited character. Her first outfit, the Wild Outfit, can be bought for

30. Her second outfit, the Unicorn Outfit, can be bought for

Jia is a Singaporean girl with short brown hair, brown eyes, and wears a white shirt with a black cat on it, a teal jacket, denim shorts, brown sneakers, an orange cap facing backwards, and pink headphones around her neck. She might be a street skater.

Not to be mistaken with Frank's Tiger Outfit, Jia's Wild Outfit has Jia wearing a Tiger costume with a blue bag and blue sneakers. She also gains facepaint in the appearance of whiskers and an animal nose.

, Jia recieved a new Unicorn Outfit. In this Outfit, She wears a purple dress, blue belt, purple necklace, Rainbow shoes, and a Unicorn jacket with red, green, and purple stripes on each side. She has pink eyeshadow and lipstick. 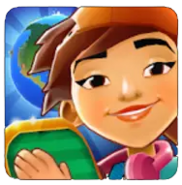 with the Unicorn Outfit 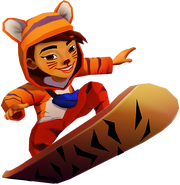 Jia in her Wild Outfit and Bengal Board

Jia with the other female surfers

Getting a highscore with Jia

Jia in her Unicorn Outfit surfing on Jazz