Jenny can be unlocked by purchasing with

. She is the thirtieth limited character in the World Tour series, and the thirty-second in total.

Jenny is a Chinese-American girl living in San Francisco. Given San Francisco's association with both hipsters and hippies, Jenny may be either or both, though the overall theme of the San Francisco update implies she is a hippie. In all her outfits, Jenny wears large round white glasses and has black hair with pink gradient.

Her default outfit consists of a black croptop, dark purple yoga pants with some kind of paisley pattern, and white flip flops. Her hair is done in a mess bob, held by a multicolored woven headband. She also wears a turquoise necklace with a feather and turquoise bangles.

Her Party Outfit has Jenny don an ornate yellow and red quipao over matching sneakers and blue jeans. Her hair is instead done in two thick pigtails with two pink rose hairpins. This outfit it´s for celebrate the Chinese New Year 2016 of People´s republic of China

In her Pixel Outfit, she wears a white shirt shirt with pink sleeves and a blue collar with a pink pixel pattern. She wears a indigo and purple bracelet. She wears indigo shorts with pink embroidering and knee high indigo and pink gradients along with blue, pink and white shoes. Her glasses change to a cyan and indigo pixel patterned frame and she also gains a white cap with cyan and pink accents. She carries a video game console on her waist attached to a cyan belt. Her hair returns to the original style from her original outfit. 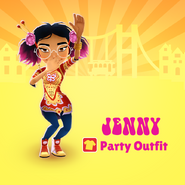 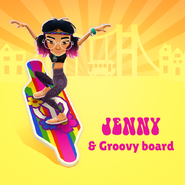 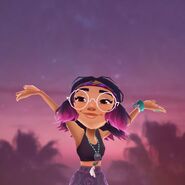 Jenny having a blast at Coachella

Top Run with Jenny in her Pixel Outfit

Jenny along with other female surfers 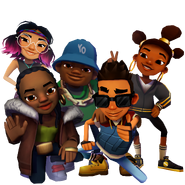 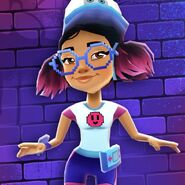 Jenny in her Pixel Outfit in front of a wall 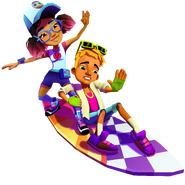 Getting a high score with Jenny

Getting a high score with Jenny in her Pixel Outfit

Getting a high score with Jenny in her Party Outfit