View source
Not to be confused with Jasmine Flower.

Jasmine is a limited character that is exclusive in the

edition. She can be purchased with

30. Her second outfit, the Ankh Outfit, can be purchased for

During her release, she also received the Safari Outfit, which costs

30. In this outfit, she wears a safari hat with sunglasses, and wears a turquoise scarf with binoculars on her neck. She receives a light green polo, and some khaki shorts. She receives an armband of the same color as her scarf on her left hand, and her sandals are replaced by beige colored sneakers (which resembles Tasha's sneakers) with her leggings left unchanged.

re-release gave her the Ankh Outfit. The outfit is inspired from the “Egyptian key of life” that is called Ankh. Her sandals change to gold, she wears a black dress, the dress seems to be a darker version of her default outfit’s dress with a turquoise band and the Ankh sign around it. She wears turquoise and gold bangles around her hands, she also wears golden earrings, for make up she wears black lipstick and turquoise eyeshadow with black kohl that is inspired from the Eye of Horus around her eyes. Her hair is an ancient Egyptian hairstyle where she wears a long golden cylinder headband.

Jasmine welcomes you to 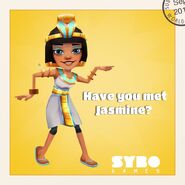 Have you met Jasmine? 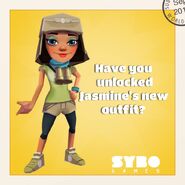 Have you unlocked Jasmine's Safari Outfit? 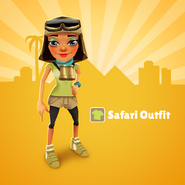 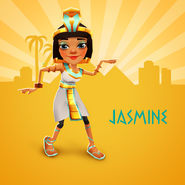 Getting a Top Run with Jasmine

Getting a Top Run with Jasmine in her Safari Outfit

Jasmine in her latest outfit, the Ankh Outfit

Jasmine surfing on the Croc Board

Jasmine in her Ankh Outfit surfing on Turtle