Jaro is a limited character in

and can be unlocked by purchasing with

95,000. He is stated to be a fearless warrior hailing from Prague. As with his home city's theme, Jaro is styled after a medieval hero. Given the lack of stereotypical knight-like features, he is most likely some sort of rogue.

Jaro appears to be a Czech teenage boy who most likely appears to be an adventurer. His outfit is a green tunic with a brown belt, purple edges and a white shirt and pants. He also wears a set of brown fingerless gloves, buckled similarly to his belt, and brown fringed boots. His brown tricorn hat is adorned with a large pink feather, and his mouth is covered by a violet bandanna. His eyes are green and his hair is brown. The staff in his idles is a plain stick.

In his Joker outfit, he wears an ornate medieval jester costume, styled in black and purple with gold highlights. He now wears a white full face mask with purple makeup patterns. His staff is now spiral-striped in black and white, with a purple/black jester head on top. 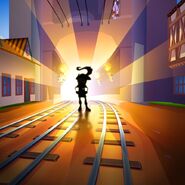 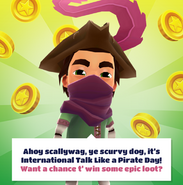 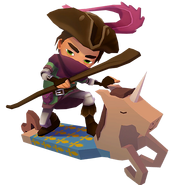 Jaro in his Joker Outfit looking around

Jaro along with other surfers
Español Français Português do Brasil Türkçe
Community content is available under CC-BY-SA unless otherwise noted.
Advertisement