Jamie is a limited character that is exclusive to

Jamie is a British guy who wears a red jacket inside a green vest. He also wears a green hat with a fuzzy, red bobble. He has green eyes. He seems to be wearing tight black sweats and white shoes with black laces. He holds a camera. Unlike many of the other characters, he appears to be a young adult rather than a teen or child.

, he had blue eyes and wore a pair of sunglasses with a gold frame. He had a camera with a neck strap. His green hat also didn't have the red bobble.

This outfit is launched in

. In his Top Hat outfit, he wears a white shirt and red tie with a yellow and red striped undercoat. He wears brown trousers, smart black shoes and a green suit jacket with holly pinned on the left side. He wears white gloves and a Brown top hat and has an old camera with a stand.

This outfit is launched in

. In his Hatter outfit, he now has a hat with a card with a rabbit on it, he has a grayish-blue bowtie, a darker cream-blue shirt, a yellow jacket, gray pants, and green shoes with gold soles. 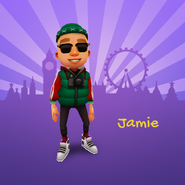 Purchasing Jamie during the event

Getting a Top Run with Jamie 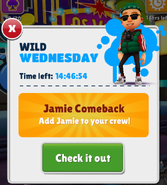 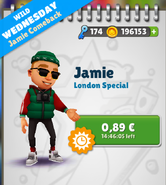 Purchasing Jamie during the event

Jamie Welcomes The Player To

Jamie with his old look on Snowflake

Jamie with his Top Hat Outfit on Snowflake 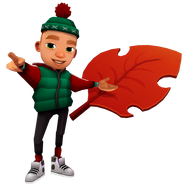 Jamie in his Hatter Outfit surfing on Bunny 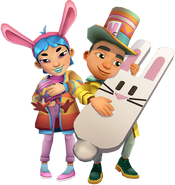 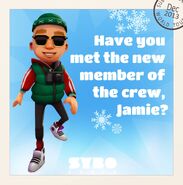 Have you met the new member of the crew, Jamie?