Izzy is a limited character that is exclusive to

. He is the twenty-fourth limited character in Subway Surfers, and the twenty-second in the World Tour series. He can be purchased with

30. His second outfit, the Laki Outfit, can be bought for

Izzy is a Hawaiian boy who wears a hula skirt, leaf wristbands and a grass crown on his head. He has tribal marking on his body. He has almost no clothes, and behind the crown hides a black Mohawk, which will be shown in the Aloha outfit.

In his Aloha Outfit, he wears a light blue open shirt and red shorts with yellow designs on it. The markings on his body and face is removed, as well as his grass crown. Instead, a black patch of hair could be seen in the middle of his head.

In his Laki Outfit, his entire face is covered with a purple and blue tiki mask. A flower could be seen in the left side of the mask. He wears a purple dress and a ring on his left leg. The black patch of hair could also be seen in the middle of his head. 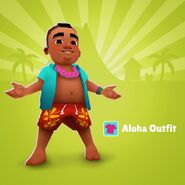 Getting a Top Run with Izzy

Getting a Top Run with Izzy in his Aloha Outfit

Getting a Top Run with Izzy in his Laki Outfit 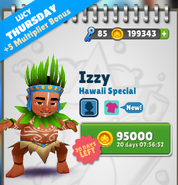 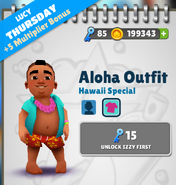 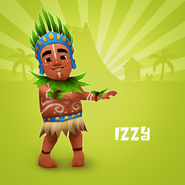 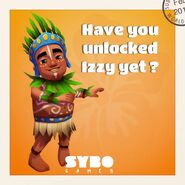 Have you unlocked Izzy yet? 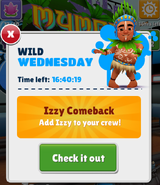 Izzy surfing on the Tiki Board 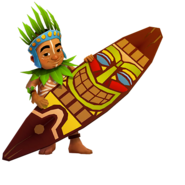